No Result
View All Result
Home

Top 8 Popular Temples Must Visit in Mathura and Vrindavan

by Rishi Chauhan
in Travel
0

The city of holy place Vrindavan is situated in Uttar Pradesh, also known as the city of temples. The place earns great attention because of the stories and amazing Lilas which were performed by Lord Krishna. There are many enormous ranges of temples to visit in Vrindavan. Every year many followers visit this city along with its sibling city Mathura.

10 Popular Temples in Mathura and Vrindavan

Plan a trip to temples in Vrindavan on the main occasion of Janmashtami, Holi, and Radhashtami. The festivals are celebrated with intense rituals, and it draws the attention of the huge crowds from all over the world. The word Vrindavan comes from Vrinda, which is the name of the basil (Tulsi) plant which is also considered as the purest devotees for Lord Krishna. The large numbers of temples are situated in the banks of the river Yamuna.

Below are some holy places which are situated in Vrindavan 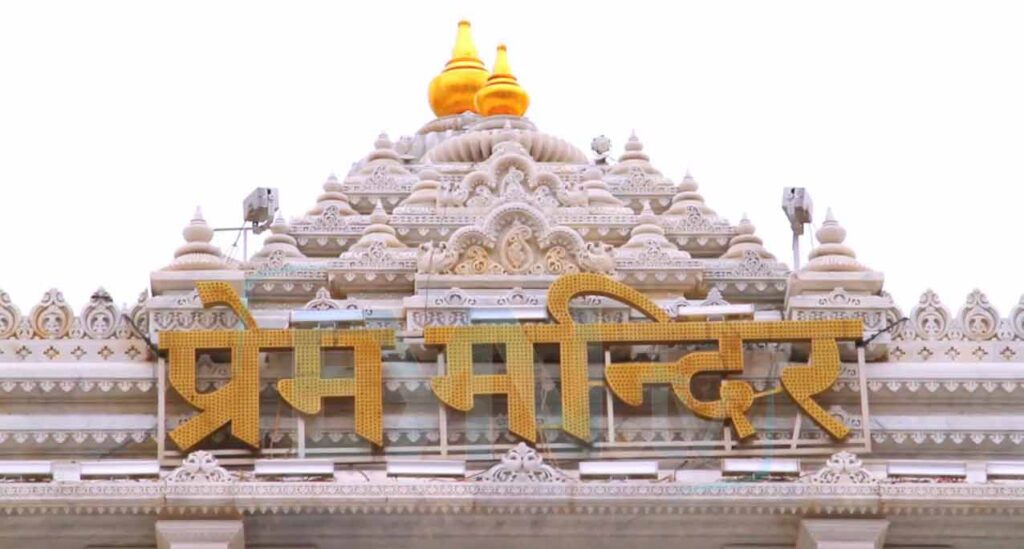 Prem Mandir is the most visited place in Vrindavan which is stretched around a vast area of 54 acres of the land. It is a beautiful temple which is dedicated to Lord Krishna and the Krishna lovers. Kripalu Maharaj, the spiritual guru, had established this whole temple structure in 2012.

The devotees offer their prayers to Sri Radha Govind and Sri Sita Ram who are residing inside the temple premises. The temple is comprised of the magnificent built structure with pure glossy white marbles. The temples in Vrindavan are well maintained, and there is a neatly maintained garden that showcases the complete architectural appeal to the visitors.

The open space ground consists of numerous numbers of statues and the wall paintings of Lord Krishna, Goddess Radha, and many more legendary characters. The large numbers of devotees also show some major interest in the Lilas which are presented in the temple.

The temple consists of the musical fountain which attracts visitors from different parts of the world. According to the bhajans and the Kirtans, the colorful water turns according to the beats and the tunes. The most prominent Lilas of the city is the Rasalila and Govardhan Lila. 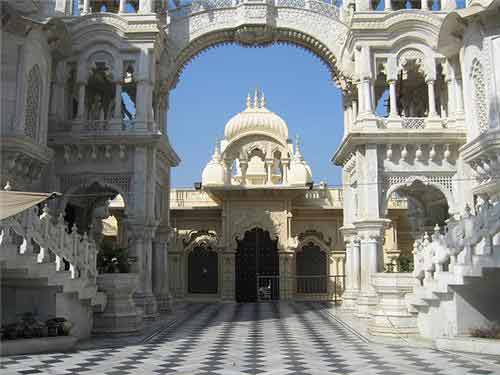 The temple is located near the outskirts of the Vrindavan and the ISCKON temple is also called as Sri Krishna Balaram Mandir is very much popular in the town of Raman Reti. The temple premises are fully constructed with white marble. It was the first temples in Vrindavan which were built by the ISKCON (International Society for Krishna Consciousness) and was established 1976 by A.C.

Bhaktivedanta Swami Prabhupada. The area is widely stretched and is well maintained in which many houses and compounds have been made. There are lots of rooms that draw the message of the Swami Prabhupada through the books he had written, bhakti, and the pictures which are all centered in love for his Lord Krishna.

The temple premises comprise three altars which are beautifully decorated with the painting of the deities Gaura Nitai, Radha Shyamsundar, and Krishna Balram. The best time to visit this temple is during the Aarti hour so that the devotees can enjoy the chants and the cultural dance which are performed by the devotees all over the world.

The entire temple consists of the teachings and the contributions towards Lord Krishna which is beautifully presented by Swami Prabhupada. The whole temple shows the Hare Krishna movement. The temples in Vrindavan and the house of the Swami are converted to a great museum, and the exhibition hall comprises the beautiful wall painting and the pictures which attract the visitors. This is a must-visit the temple for the devotees. 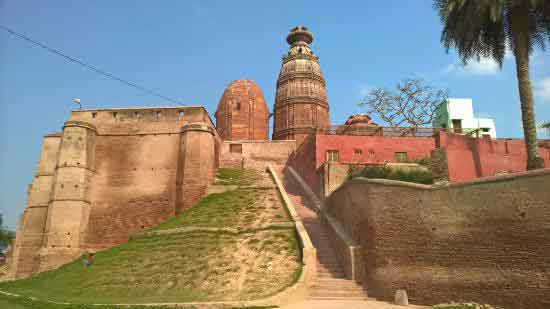 The Madan Mohan Temple is the oldest temple in the city of Vrindavan. The temple is located near Kali Ghat which is on the banks of the river Yamuna. It is not only just a holy place, but it was the architecture at its best long back then in the 15th century. The temple was established by the saint Sanatan Goswami who had given all his love towards the deity of Madan Mohan.

It was said that Lord Krishna rested on this hill, and all of a sudden Krishna felt cold, and at that moment Dwadasha Aditya (twelve suns) came towards Krishna to give him warmth and later this hill name was changed to Dwadasa Aditya Tila (hill). Constructed above on a hill, the temples in Vrindavan are the rebuilt version of the original temple that was invaded and fully destroyed by the Aurangzeb who was the Mughal Emperor.

The replica of the image is being worshipped today, as the original idol was shifted to Rajasthan for safety purposes. The most well-known fact of this temple is its red color structure which is situated almost 60 feet, and the temple is visible from a distance while approaching the temple. Mark, this temple to be a must-visit place in the city of Vrindavan. 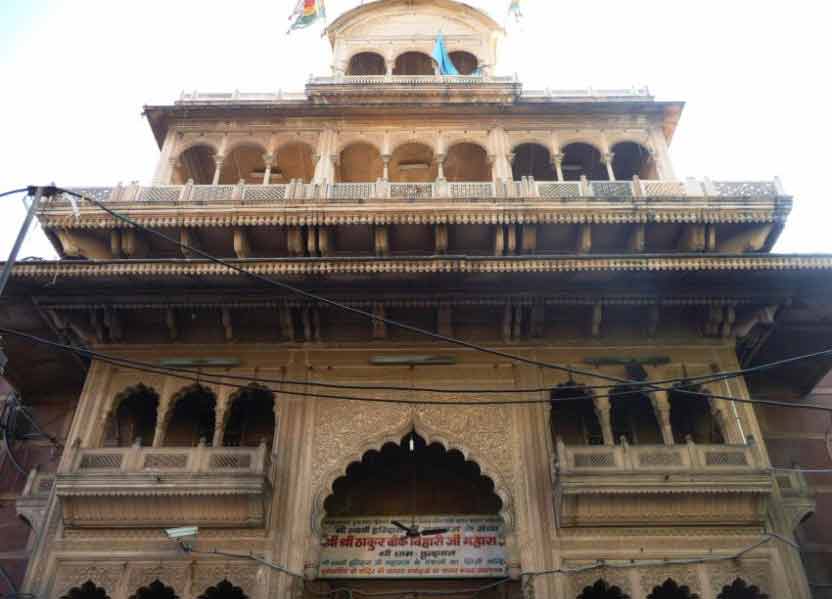 The temple is one of the most visited and notable shrines in the town of Vrindavan. The Banke Bihari Temple is dedicated to Lord Krishna. The temple is known as Banke because it showcases the Lord in Tribhanga posture which is bent (Banke) in three places.

The temple was founded in the mid 18th century by Swami Haridas. The temples in Vrindavan are constructed in a typical Rajasthani style which portrays the arches and the detail of the temple in a unique way. There are huge numbers of visitors who visit daily for its divine atmosphere.

The visitors and the devotees are so much spiritual that they enjoy and celebrate the proceedings according to the mood of the temple as it’s always celebratory. Spending the quality time in the premises of the temple helps to feel the charismatic brightness of the Lord who then appears as the Holy couple only to bless the devotees and the pure-hearted visitors.

The bhajans and the chants of Radhe Radhe will make the ear melodious. The best time to visit this temple is in the daytime. The decorations and the ornaments which are provided to Lord Krishna on the time of the darshan is the main focus which should not be missed. 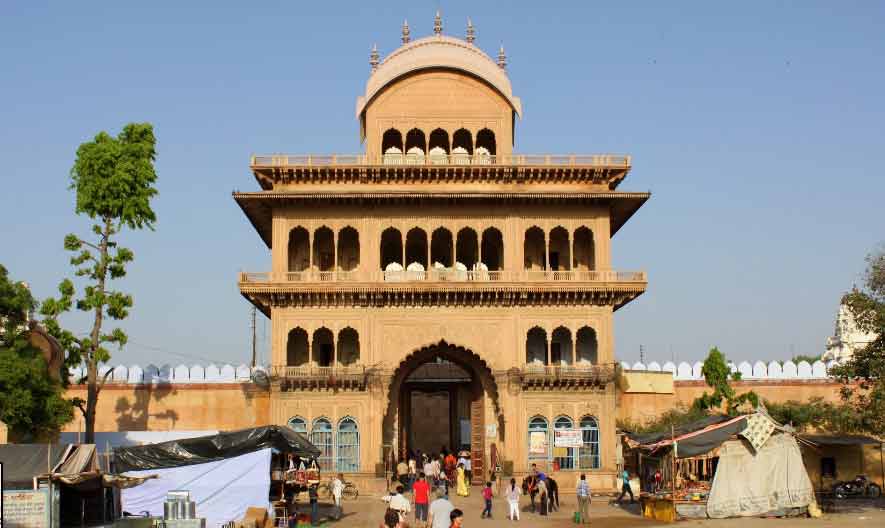 Shri Ranganatha Temple or Rangaji Temple is not only the largest temple in the city of Vrindavan but the entire region of North India. The temples in Vrindavan are dedicated to Lord Krishna as the delighting and kind-hearted Lord Ranganatha. The temple is huge in its configuration, and the outer walls of the temple rise to a 773ft height along with 440 breadths.

The temple is built in a completely Dravidian South Indian style. The traditional architecture is spread widely to a peaceful area. The garden is well maintained with also comprises a water tank which completely enhances the beauty of the temple. The tall ornamented statue of Gopuram makes away towards the main hall of the temple.

The deities which are present inside the temple premises are the Lord Rangaji in black stone, and Lord Rama, Goddess Sita, and Laxman can also be worshipped with full prayers. The wall consists of the paintings which showcase the entire story of the temple. When going inside the temple room, the devotees can easily figure out the 50ft tall gold-plated Dhwaja Sthamba which is a pillar-like structure which then enhances the beauty of the temples in Vrindavan.

The temple premises are so large that one can explore the whole temple most conveniently without even taking the touring guides. The best visiting time for this temple is in the month of Chaitra or known as Hindu month between March and April. 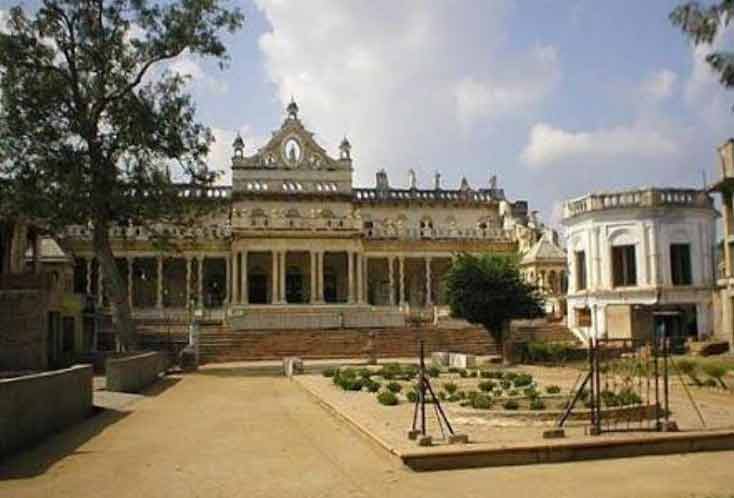 There are 12 numbers of columns that are 15 feet long. The main gate of the temple leads to the main hall in which the deities of Lord Radha and Lord Krishna who are also known as ‘Chote Radha Raman’ are found. The temple has been appreciated for its gigantic construction. It gained popularity due to its magnificent column pillars which are the main attraction towards the devotees and the visitors.

The Basanti Kamra is one of the major attractions to the devotees and the visitors as the whole room is equipped with Belgian Glass Chandeliers which are more colorful and precious. On the interior of the wall, there are numerous numbers of paintings which signify the story of Lord Krishna. The rooms of the temples in Vrindavan are opened twice in a year, but the outdoor of the temple will make the devotees fall in love with the temple and the deities. 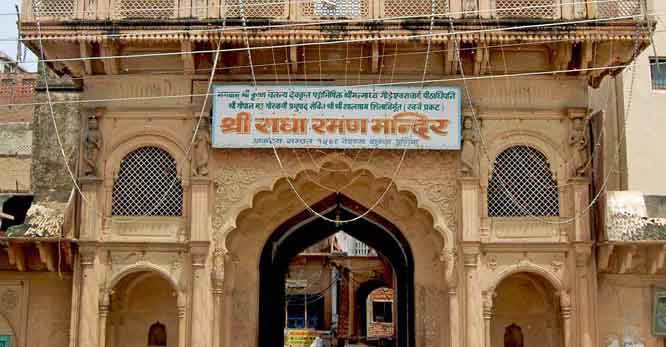 The Radha Ramana Temple is located between the Nidhivan and the Loi Bazaar in the city of Vrindavan. The sacred place is dedicated to Lord Krishna who is seen giving pleasure to Radha. A narrow path leads to the main gate of the temple which is beautifully constructed in the Mughal Architecture style.

While entering the temple premises, there’s a Samadhi room which mainly consists of the Samadhi of Gopal Bhatta Goswami who was a 15th-century devotee and the saint who had showcased his loved towards the Radha Raman in the form of Shaligram. The beautiful temple was built in late 1826 by Shah Behari Lall, and from that day the temple follows the deity of the Radha Raman which is engraved in black stone.

The main fact rather than the temple is that the deity of the Radha Raman is only one of the original idols which are left in Vrindavan. The best time to visit this temple is from April to May. The special and the most familiar event to visit this temple are on the festive event of full moon night according to the Hindu calendar. 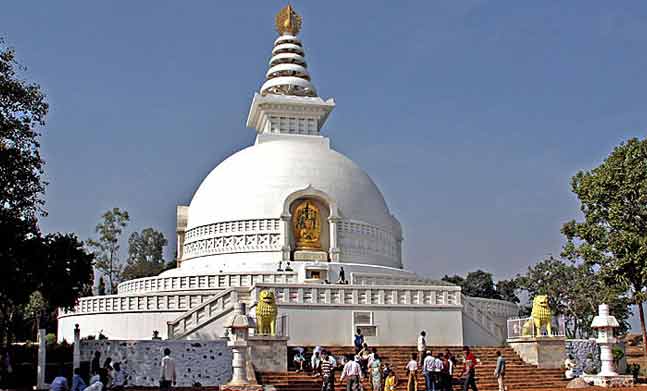 Shree Gopesvara Mahadeva Mandir is a typical Shiva temple which is situated in the town of Vrindavan. It is considered as one of the oldest living towns in the city of the holy place. The temple focuses and pays tribute to Lord Shiva who had come to visit this holy place to see Lord Krishna who was engaged with the Gopis which was also known as Rasalila (a ravishing musical dance).

And on his visit, he was completely denied visiting inside the temples in Vrindavan allows only one male to reside inside the temple that to only Lord Krishna and no one else. When Lord Shiva pleaded against the devoted deeply, Sri Vinda Devi blessed Lord Shiva so that Shiva can take the avatar of Gopis and can attend the Rasaleela along with Lord Krishna who then gave Shiva a beautiful name Gopeswara.

And till date, the temple is known as Gopeswara Temple. The temple doesn’t have any ornamentations and houses as there is only one Shiva Linga that was originally installed by Vajranabha. All the devotees and the visitors can enjoy the Shiv-Lingam which is always decorated with the fresh and the fine flowers along with some clothes and fruits.

The city of temples provides many holy pilgrimages that can be visited any month. There are large numbers of visitors who visit daily to offer prayers to the Gods. Even today, the entire temple carries some cultural essence of the basil plants which are widely offered to Lord Krishna.

By standing on the banks of river Yamuna the visitors and the devotees can overlook many temples. Now the city is a home for many saints and servitors who give their best to serve the deities. The city provides many ashrams and houses to the visitors so that they can indulge in the local culture.

Top 25 places that you must visit in Delhi

Hire the perfect intelligence services for your business

7 best places to visit in Chandigarh

Top 25 places that you must visit in Delhi

TOP 9 PLACES IN Mumbai U MUST VISIT

10 Churches in Delhi That You Must Visit

What are some of the best Goa travel trip?

Hire the perfect intelligence services for your business

What Is Cloud Management? Everything You Need To Know